Valerie Harper turned 74 on August 22, 2013, but no one wrote about it and no one seemed to care.
How can it be that fickle media friend People mag put her on the cover in March with a "six months to live" tag line (due to a brain cancer diagnosis) and then forgot about her birthday?
Six months after their cover and she made it to the ripe (oldish) age of 74, good for her.
Harper also got an acting job and flew all the way to Canada to work on a TV movie in early August.
One day you're headlines around the world, and the next day Miley Cyrus is "twerking" with a foam finger on an awards show and you're forgotten entirely. 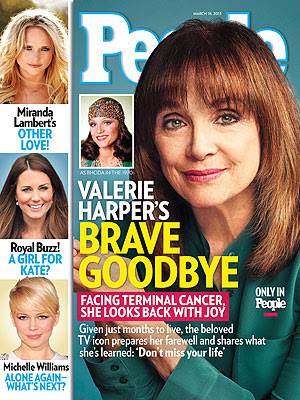 Posted by Exposarazzi at 9:22 PM